What a perfect first wedding anniversary! Shortly after I had gotten off of work yesterday, my husband called me to say he had our evening all planned out. He told me he had made dinner reservations for us, and that it would be a surprise. I absolutely love surprises, so I was pumped! I am normally the one who plans our date nights, so I was happy he took the initiative. Truthfully, he usually has the better ideas anyway.

Yesterday was another scorching day in Texas, so as soon as I got home, the first thing on my mind was to freshen up. I put on some of my favorite perfume, Romance Rose by Ralph Lauren. I purchased it from Macy’s a few months ago, after Jeremy and I were at the mall one evening smelling perfumes. He and I both fell in love with it’s sweet floral fragrance. One spritz of it and I’m good to go!

I brushed the frizz out of my hair, and lathered on some of my favorite lotion, which is Soap and Glory‘s The Righteous Butter Body Lotion. I normally wouldn’t mix my lotion and perfume unless they were of the same scent, but they each have rose notes in them, so they complement each other nicely.

I forgot to mention that when I walked into our bedroom, Jeremy had a gift waiting for me on the bed. I was pleasantly surprised, as last week, we had both agreed not to buy each other anything. I took this seriously, so I had nothing to give him and I felt awful for it. He is such a stinker! A sweet one though. 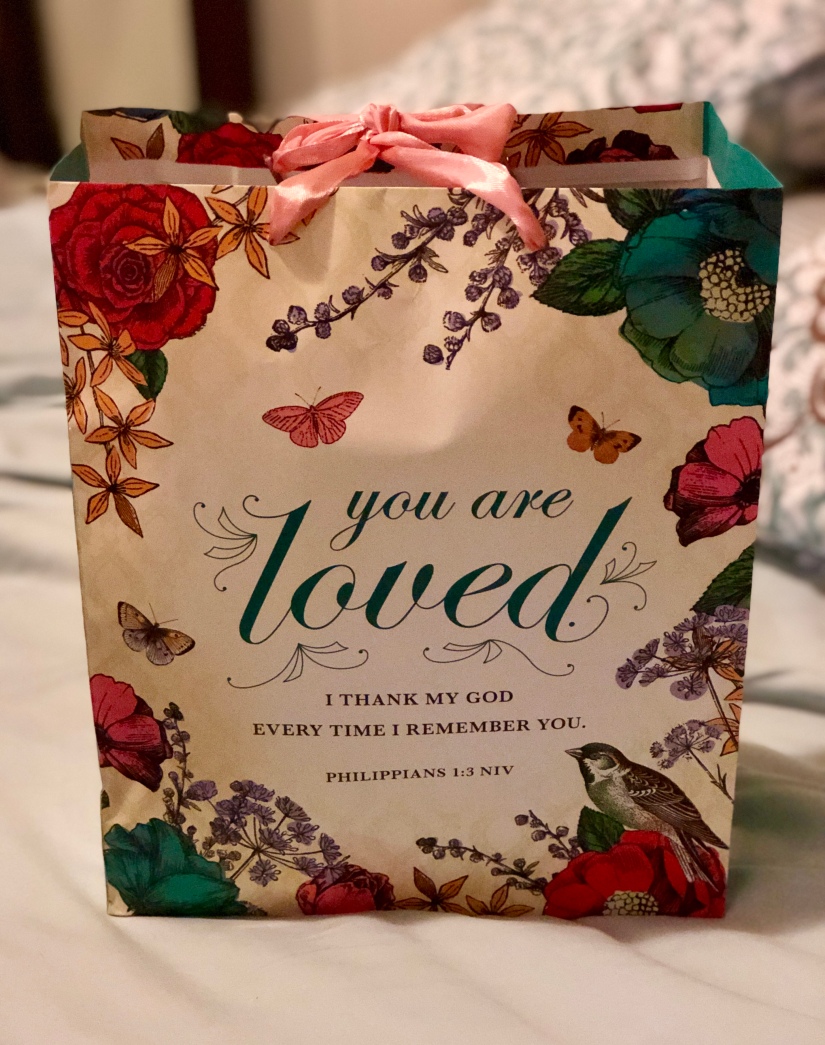 Inside the gift bag was a cute ceramic red mug with an attached spoon that said, “Always know that you are loved dearly, and prayed for daily.” He later told me that he chose to buy me this mug, as a reminder of our first date. When we first met, he had bought me a set of four coffee mugs with inspirational Bible verses written on them, along with four packages of different roasts of my favorite coffee. It was absolutely perfect. He also included three beautiful new journal notebooks for me to write my thoughts in, and a vinyl wall sticker to put over our bed that read, “Every love story is beautiful, but ours is my favorite.” Oh, and inside one of the notebooks, he had written me a sweet and thoughtful letter inside. He knows me so well! 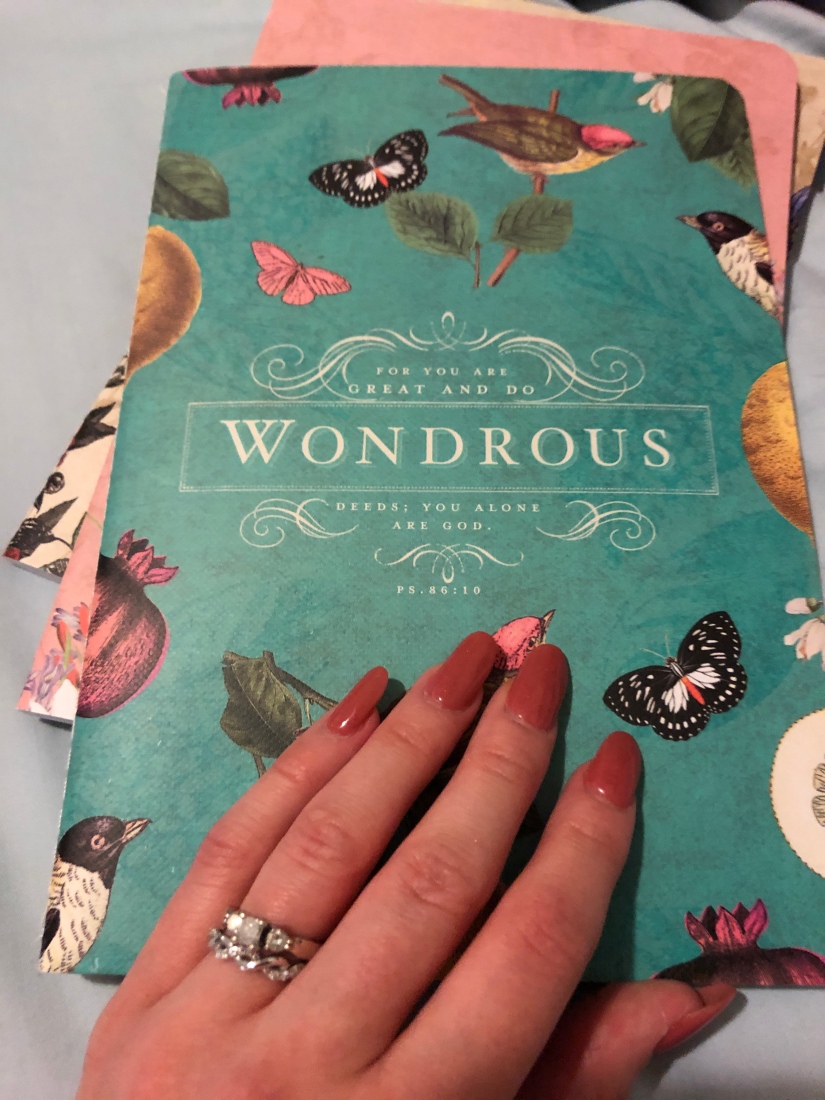 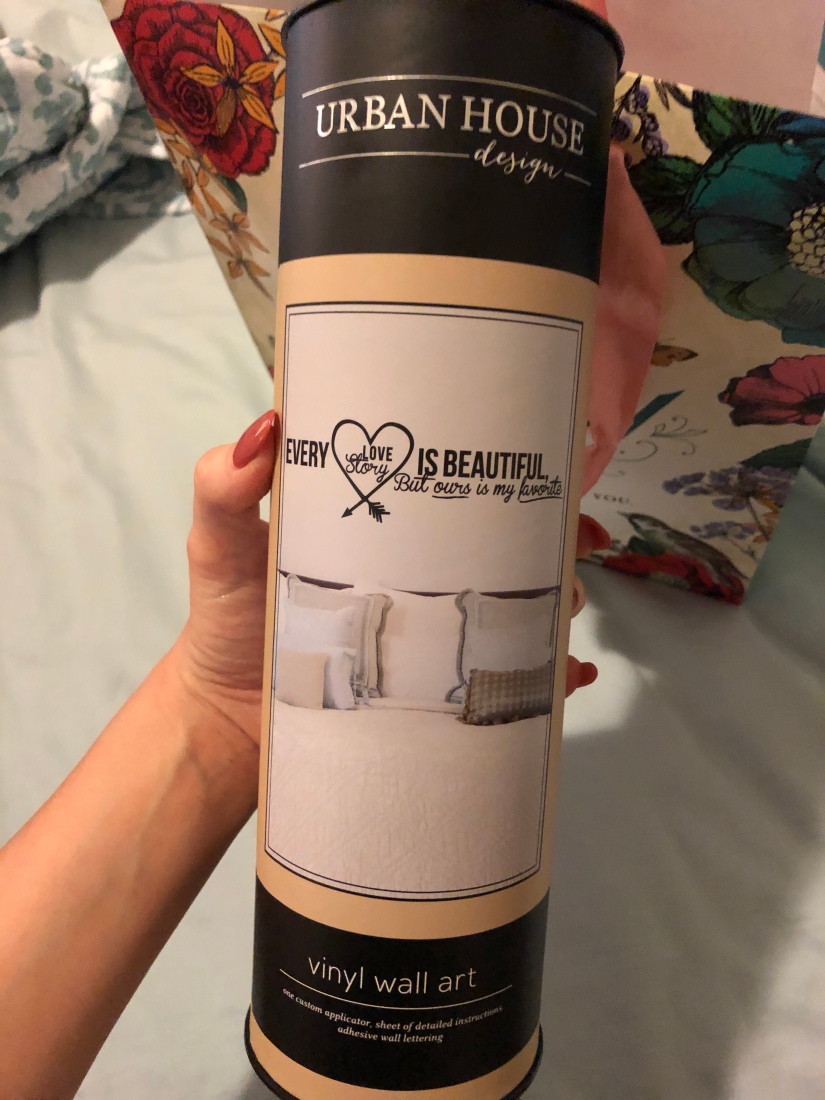 We left the house and made our way over to Rockwall. Jeremy decided to go ahead and tell me where we were going in case the reservations didn’t work out. The restaurant had told him on the phone that they don’t really take reservations; however, they were going to try their best to save us a table, given the fact that it was our anniversary. We reached our destination, parked the car, and made our way over to the Rodeo Goat.

I love all of the flowers and beautiful fountains that surround the Harbor in Rockwall! I couldn’t help but take pictures of them as we walked. It has kind of become our spot, being that it’s where we first met, where Jeremy asked me to be his girlfriend, and where he popped the question. So many memories I will never forget!

When we walked inside the Rodeo Goat, there was a sign on the floor that said it was open seating. We went to the outside portion of the restaurant, and chose a table with two bench swings attached to it. The last time we were at The Harbor, we walked past the Rodeo Goat not knowing what kind of restaurant it was, but it looked appealing because of the swings! We made a note to try it sometime, so here we finally were!

It was bright and summery outside, but the shaded screen above us helped in keeping us cool. We took our seats, and we each began to gently swing, as we waited for someone to bring us our menus. It wasn’t long before our waitress walked over to us with a friendly smile. She gave us our menus and took our drink orders; sweet tea and Sprite. She left, and we began scanning the menu. 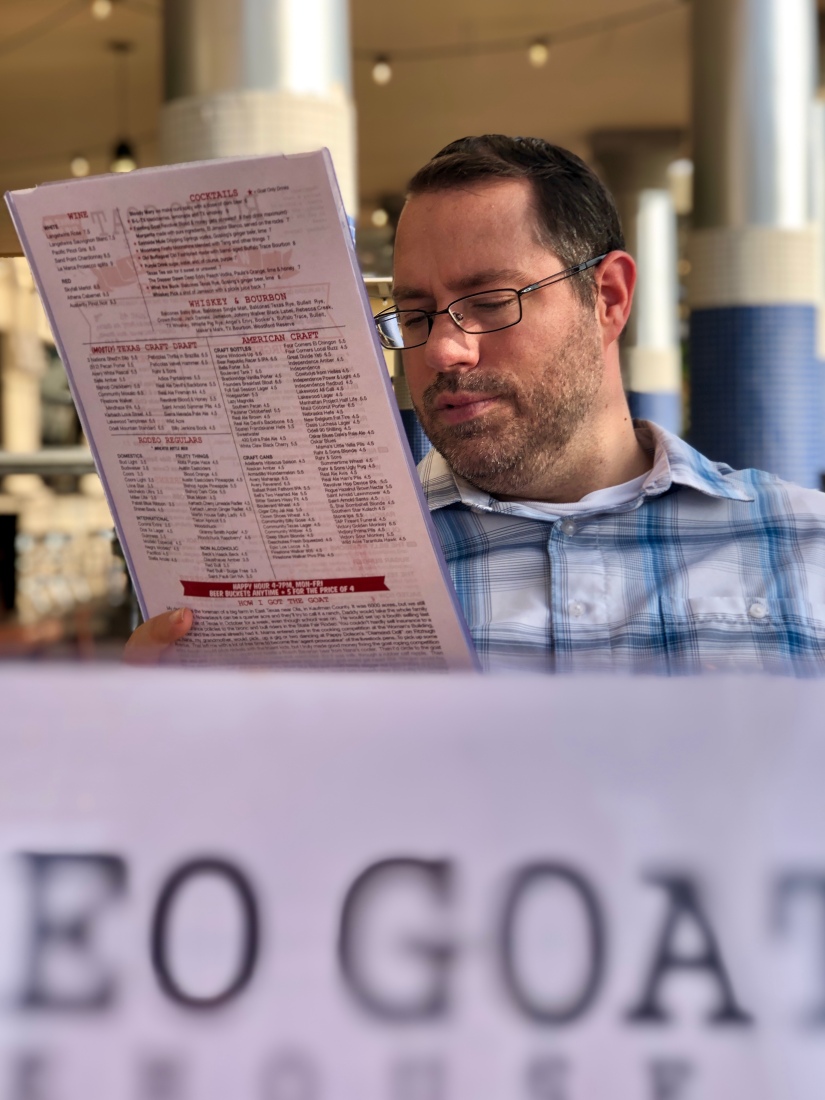 We chose the Chips and Queso for our appetizer, and ordered our main course. I decided to go classic, and ordered the D.C.C. Cheeseburger, with no onions, and mustard on the side. Jeremy ordered the Brad Sham Cheeseburger without jalapeños, and a basket of French fries for us to share. Our waitress wrote down our orders and left. 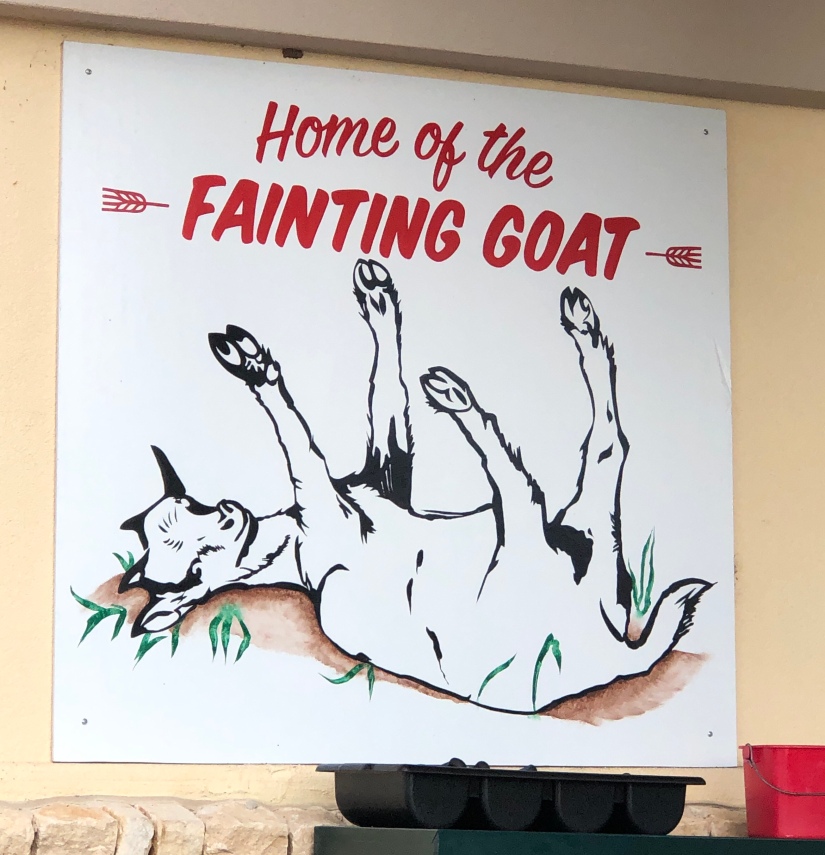 The restaurant definitely had that Texas feel to it, what with the heat and the country music playing in the background. The song Forever and Ever, Amen, by Randy Travis came on.

I took a breath, and I could smell the sweet scent of the flowers nearby. I looked at Jeremy in front of me and I couldn’t help but smile at him. It’s funny, but sometimes I still get butterflies in my stomach like I did when we first met. He looked so handsome with his blue plaid shirt and those beautiful green eyes. How did I get so lucky?!

We were making conversation when, a few minutes later, our appetizer came out to us. It looked and smelled incredible! The presentation was beautiful!

You can’t live in Texas and not have chips and Queso as part of your diet. Oh, and salsa and guacamole! Jeremy normally won’t touch guacamole, but he actually tried some of the guacamole that was included in our appetizer, and loved it! It tasted like they had added Salsa Verde to the avocado and it was the perfect touch!

I took a salted tortilla chip, dipped it in the fresh red salsa, and it almost had a sweetness to it, along with the spicy; which was pleasing to the taste buds. You could really taste the juicy ripened tomatoes, garlic, and spicy jalapeño peppers!

We normally only get Queso Blanco at restaurants, because to us, it tastes better. This yellow Queso however, was bursting full of flavor! It had all of the perfect ingredients: fresh guacamole, mouth watering Pico de Gallo, and seasoned ground beef. It was delightful!

Next came our burgers.

Am I making you hungry yet?

I took a bite of mine, and I could immediately taste the buttery toasted hamburger bun, mildly crispy at first, and then soft and light in the middle. I continued chewing as the juicy tender hamburger patty melted in my mouth, along with the yellow American cheese. It was the perfect combination of salty and savory. The sliced red tomatoes and shredded green lettuce were so fresh, they tasted like they were hand picked from a nearby garden. 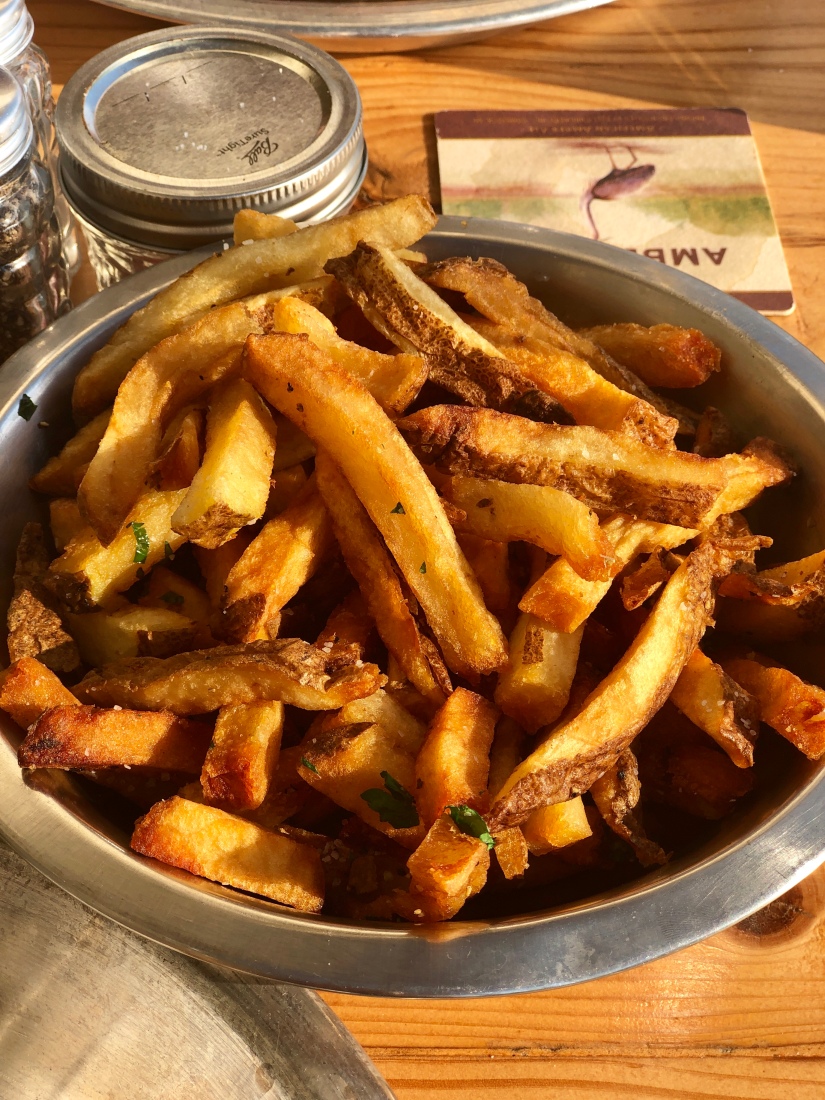 The fries were light, airy, and as crispy as they should be! Fried to perfection.👌🏻

I didn’t try any of Jeremy’s burger, but based on how quickly he devoured it, my guess is that it must have been pretty amazing. We each only ate half of our burgers, as we knew we would be walking around after dinner. We didn’t want to be overly full to the point of feeling sick. We thanked our waitress, paid for our food, and left the Rodeo Goat with the promise of coming back.

Our bellies were full, and our hearts were happy! We were walking along the path where it all began. A rush of memories swept over us. I kept looking around, and pointing out things like, “That’s the little shop we went and got frozen yogurt from before you proposed!”, and, “Over there, are the stairs we walked down from the Hilton Hotel to get to the lighthouse!” All precious memories that had brought us to where we were as a couple. 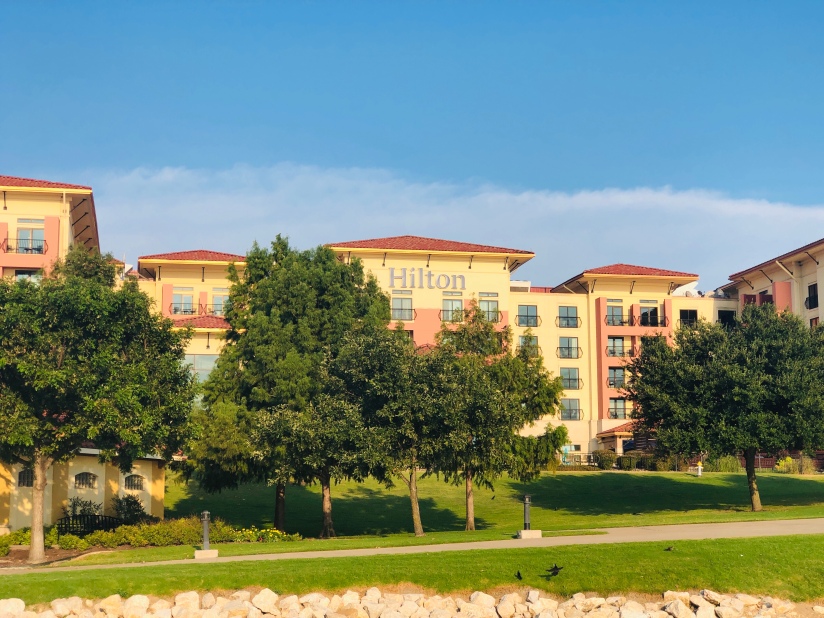 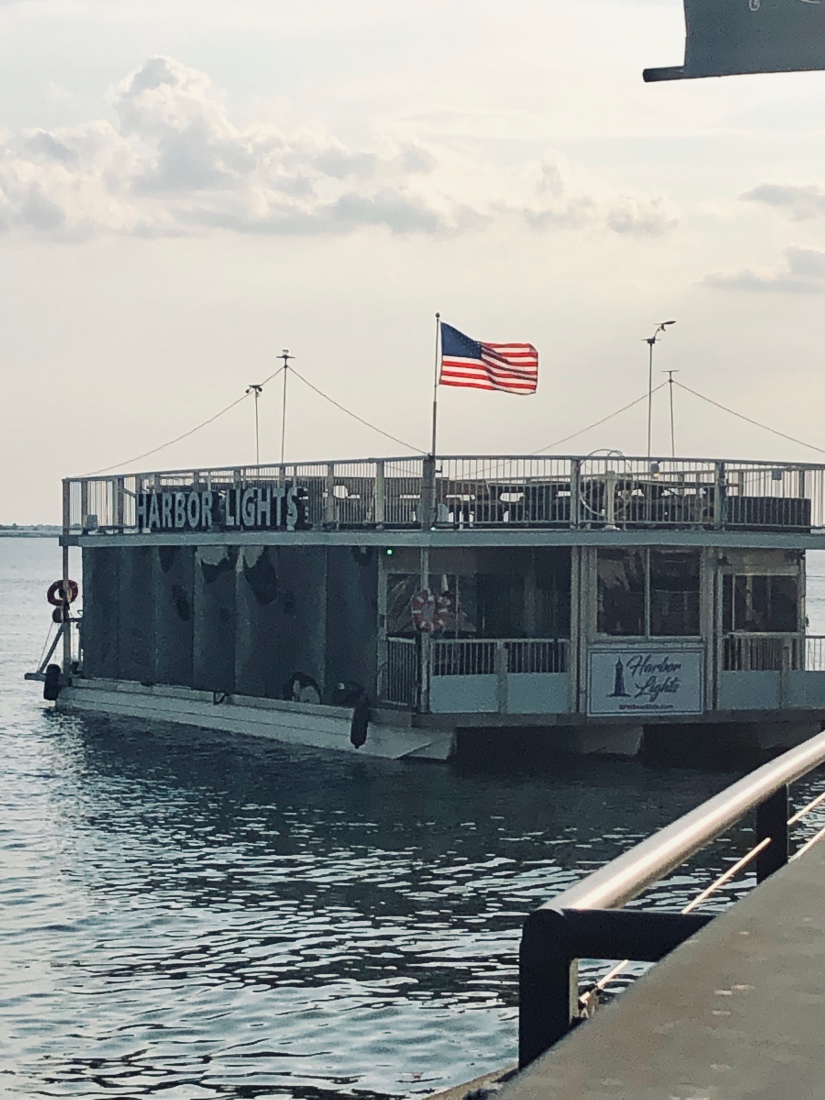 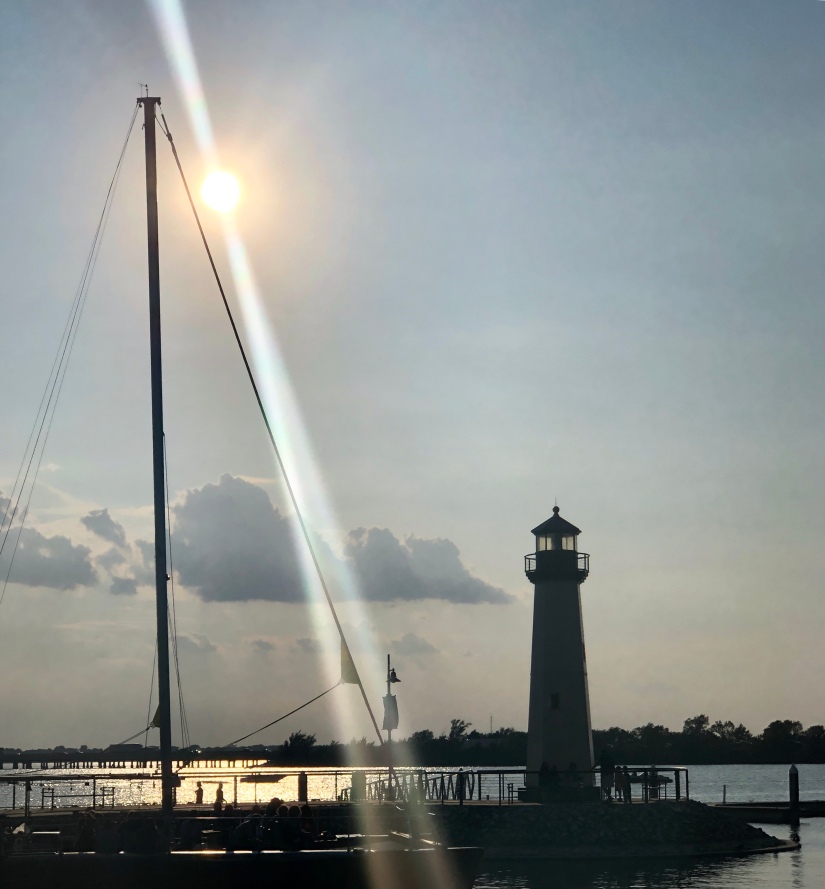 We made our way over to the lighthouse, and I was intrigued by the number of locks on the silver wires of the fence beside it. Jeremy called them, locks of love. They were all placed there by other couples. I told him that the next time we come to The Harbor, we should bring our own. It’s such a cute idea, whoever thought of it! It made me curious about their stories, and about what had brought them there to the lighthouse. Maybe they had all met at The Harbor too.

We concluded the evening by going inside the Hilton Hotel, so we could cool off in the AC. Each of us took a seat in the lobby area. 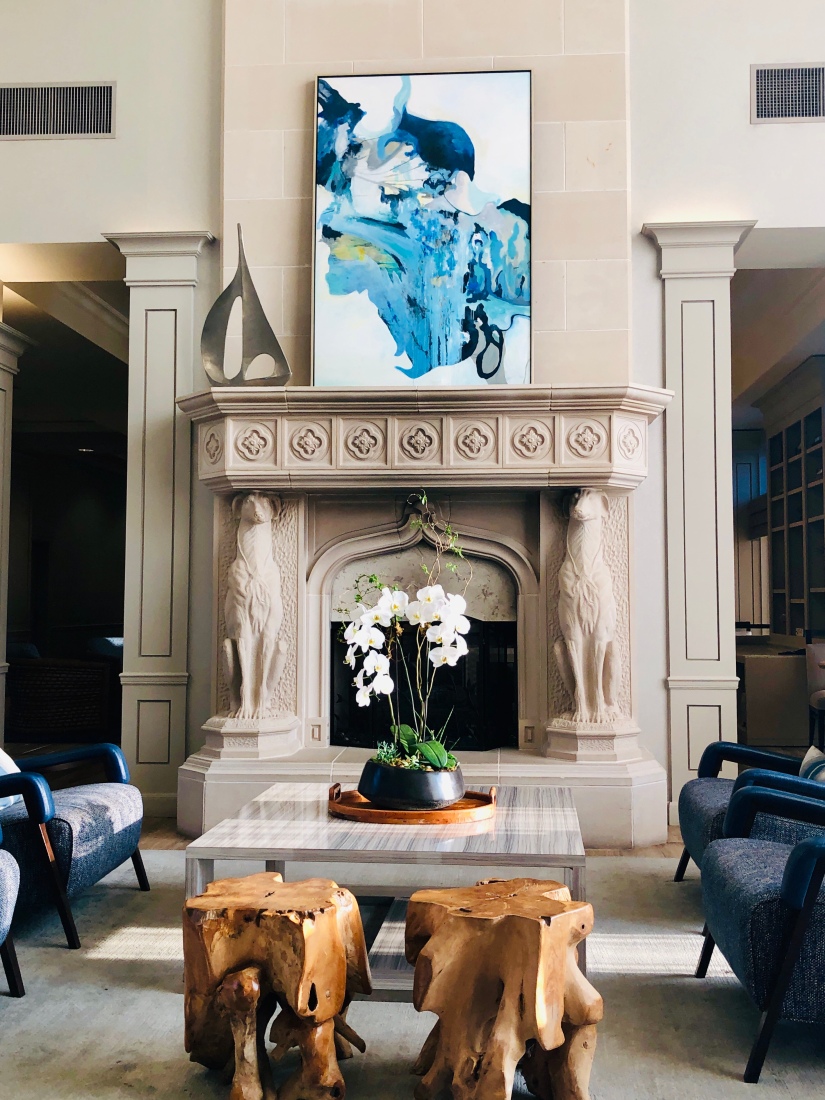 We sat and reminisced about the first time we met in the hotel lobby. How I came in drenched from the rain, and how nervous we both were meeting each other for the first time. Someone recently told me to never forget those feelings, to hold on to them forever. I know I never will forget them, because they’re how our story began.

We have been through a lot since then, and we have grown so much closer. We are both older now, and we know more about each other than we did that day. We have experienced so many things we never imagined we would, and it is all because of God.

I am so thankful for Him bringing us together, and grateful for the things He has brought us through this year, as we couldn’t have done it without Him leading the way. Even after being married for a year, God is still writing our love story, and He will continue to for as long as we live. I am so thrilled to see what He has in store for us in our second year of marriage, and all of the years to follow!

Hey! Thanks for stopping by. My name is Angela, and this is my story. View all posts by Angela Stout